With this post, I’ll try to formulate my first ‘public’ stock analysis. The company in question is Sports Direct (SPD).

The company
Sports Direct (SPD) is a a market leading retailer of sports apparel and accessories for the active life. The company is based and listed in Great Britain where its logo adorn 473 shops. Within recent years, it has expanded to other parts of Europe where 260 shops are decorated with Sports Direct’s red and blue colors. In addition, the company has entered the fitness market where it currently sits on 30 centers across the country. Third-party brands such as Nike, Adidas and Under Armor are offered in Sports Direct’s stores alongside its own brands such as Everlast. The business’ moat is its ability to undercut its competitors’ prices on said brands.

The stock
The market value is £1.7 billion at the time of writing with the stock trading around £3.00. Medio May 2017, the fundamental landscape is as follows:

In my view, it reeks of value potential. How has a company with such high returns on capital become so cheap measured on the other price-to-fundamental metrics? Let’s take a look at the price history. 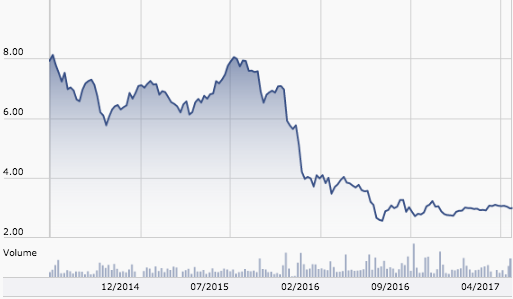 It’s apparent that the stock took a beating in Q3/Q4 2015, which continues to sting. The million dollar question is, of course, whether or not it’ll resurrect. The first mystery to solve is: What happened? In 2015, the previous CEO was prosecuted (the year later, he was dismissed). Shortly after, Sports Direct announced that the growth targets had to be downgraded slightly. In conjunction, these news caused the stock to plummet from £8 to £4. The following year, Sports Direct became the victim-of-choice for the media. The company was accused of having amoral contracts with its employees. The founder and now CEO, Mike Ashely, was then discredited when he bought a private airplane. These news meant more trouble for Sports Direct; the stock took another beating until it reached the £3-range where it’s currently trading.

Catalyst and valuation
The next question in the saga of Sports Direct is: What will make the company resurrect from the ashes? As I took a closer look at the company’s track-record, I saw an extraordinary compounding machine. My ‘hope’ – or bet, if you will – in regards to the resurrection is that the market has overreacted to a handful of unfortunate stories, and that Sports Direct’s excellent operating results and historic high returns on capital will continue going forward. This should in and of itself drive the stock price north once again. Let’s take a quick glance at the past’s highlights. During the last 10 years, Sports Directs has managed to..

Particular the latter achievement is very interesting in my view. If this can continue – which is probably naïve to believe – the equity per share would increase from the current £2,15 to £12 in 2027. Logic would dictate that this should be the approximate trading price plus a premium. I am, however, pessimistic by nature, so I’ve resorted to a Discounted Cash Flow (DCF) analysis instead (read Why are we so clueless about the stock market?).

In the below analysis (cf. image), I assume that I’ll hold the stock for 10 years. I have applied some – relative to historic performance – conservative prospects in terms of growth rates. I assume that we will incur a recession in the next handful of years, and that such would hit cyclical companies such as Sports Direct hard. I suspect that the company will – as was the case with the last crisis – experience negative earnings growth once the crisis hits (EPS fell from £0.12 to -£0.03 during 2008-2009 before regaining momentum in 2010 where it went back up to £0.16). To be on the conservative side, I assume that Sports Direct will not resurrect as quickly through the next crisis, which is why I end up with a 0% growth rate in the years 1-5. For the years 6-10, I assume (or guess, if you will) that they’ll achieve half of the last 10-years’ average EPS growth rate of 18%; hence, I estimate a 9% growth rate for the second part of the decade. Finally, I predict that the stock will trade at a P/E of 15 in 2027 based on Benjamin Graham’s rule of thumb that 8.5 characterises a zero growth company, and 20 is reserved for the absolute growth machines. Based on these assumptions, the company’s intrinsic value ranges from £3.20 to £6.40 depending on the discount rate (5%-12.5%). In a basically zero interest rate environment with generally high market valuations (cf. the S&P’s Shiller P/E of +30), I would be quite satisfied with a 7.5% annual return. I would achieve a 40.5% margin of safety with said 7.5% discount rate, as the intrinsic value comes out at £5,04.

I fully acknowledge the pitfalls that the authors of Value Investing: From Graham to Buffett and Beyond raise in terms of the uncertainty, assumptions and subjectivity of the DCF model. I thus attribute as much weight to the stock’s “cheapness” measured on aforementioned fundamental metrics in conjunction with its historic business performance. However, a conservative DCF analysis provides one with a hail in terms of whether or not the stock is undervalued (which I believe it is, obviously).

But wait, there is more..
The founder and CEO, Mike Ashley, owns 55% of the company; hence, the owner eats his own cooking, so to speak. In addition, the management team is paid a low salary, but receive generous bonuses if they are capable of creating longterm shareholder value, e.g. by reaching some ambitious 6-year EBITDA objectives. There is thus a great deal of insider ownership as well as incentive programs that ensures a focus on value creation for investors, not speculators.

Furthermore, Sports Direct has bought back shares aggressively the last couple of weeks (read about it here). In other words, the persons closest to the company regard the stock as cheap.

The CEO is a bit of special character who the media enjoys poking provocatively. He has, however, proved himself to be a growth hungry entrepreneur over the past 30 years. I’ll gladly accept a teasing headline every once in a while for some extra gold in the corporate coffers.

Finally, one may highlight that the British currency, the pound sterling, has fallen from 10.5 to 8.5 relative to the Danish krone since Q4 2015. As exchange rates move in cycles – just as all other financial assets – mixed with a (I believe) overreaction to Brexit, there is a potential to cash-in on the increase in exchange rates as well. Speculation in currencies is by far my strong suit, however, so this assumption is merely that: an ungrounded assumption.

The flipside
All is not rosy, of course. We have yet to see whether the negative media coverage will turn the consumers against Sports Direct (TTM EPS-numbers indicate a fall in profits). In addition, there is a tendency in the industry for the large and popular franchises such as Adidas and Nike to move closer to the consumer. These giants intensify their eCommerce efforts as well as opening their own stores. We shouldn’t forget that Sports Direct’s closets competitor, JD Sports Fashion, too experiences momentum at the moment. This company has tripled its revenues within the previous 10 years, also with an impressive 47-49% gross profit margin. JD’s EPS growth, however, fades compared to Sports Direct (the competitor’s stock currently trades at £4.5 with an EPS of £0.12). Furthermore, Sports Direct should be wary of new and existing competitors; fierce competition exists in a market place that allows gross profit margins around 50% – bloody water attracts sharks.

On a more general note, I’m cautious about binding capital in stocks at the moment. We’re currently in the longest bull market in history with sky-high P/E ratios across indexes. As so forth a recession is luring, cyclically sensitive industries such as apparel are often hit hard. We can’t, after all, spare toilet paper and tooth paste, but in the spirit of thrift there might be a jog or two left in those worned-out sneakers.

Conclusion
Despite these potential challenges and my reservations in terms of the market level, I consider Sports Direct an interesting opportunity in the current price range. Here is a chance to gain ownership of a conservatively financed, growth hungry market leader with ever-increasing revenues at an – apparent – spot price (P/E, 8; P/S, 0.6; P/BV, 1.3). I chose to strike at the opportunity; now it’s up to those mighty stock gods to hopefully bestow upon me that holy return.

Pingback: Book Summary, Why Are We So Clueless About the Stock Market?