I once learned that the CEO of McKesson Corp. (MCK), John Hammergren, was by far the highest paid CEO in the world. He made $145 million in 2011 and $132 million in 2012. I believe my thoughts at the time were: “I will never invest in a business that is so careless with the shareholders’ money!” Well.. Never say never.

The Business
John is still an insanely expensive figurehead with a ~$100 million compensation package. But let’s put that aside for a second and focus on the ball rather than the man.

McKesson Corp. consists of two business segments: McKesson Distribution Solutions and McKesson Technology Solutions. The former segment, which constitutes 99% of revenues, mainly centres on distributing pharmaceuticals and healthcare-related products to retailers. Hence, McKesson acts as the intermediary between drugs and healthcare producers and retailers such as pharmacies and drugstores. In addition, McKesson provides clinical support and business solutions to oncology and specialty practices.

The Stock and Associated Risks
The stock peaked at $240 in May 2015. During the past few years, the stock has travelled south. In the last couple of weeks’ market-wide bloodbath, McKesson has tumbled 16%, from $177 to $148 per share, cf. below chart.

It’s currently trading at a P/BV of 2.62, P/S of 0.15, and a P/E of 6.78. This single-digit P/E is due to a one-year pre-tax gain of $3.947 billion from the de-consolidation of McKesson’s core Technology Solutions business. Based on my calculations below, the adjusted EPS is around $9.20, hence pushing the P/E to 16 at the time of the financial report (McKesson has bought back shares since, and with the present 206 million shares outstanding, the EPS is around $9.96, which translates into a P/E of 14.75). Nevertheless, a P/E in the mid-teens doesn’t sound unreasonable for a leading giant in an oligopolistic market. 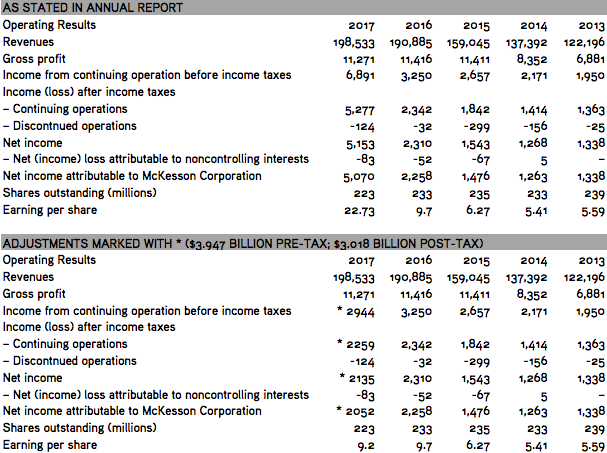 It’s not only the past few weeks that have been tough on McKesson shareholders. The previous three years haven’t been a blast, since it’s down ~40% from its peak. What happened?

Taking a point of departure in above numbers, it’s clear that margins are getting squeezed. The revenues are growing at a decent pace, but the gross profits have plateaued, and net income has downtrended from 2016 to 2017. John Hammergren comments on this fact in the 2017 annual report: “McKesson’s performance was impacted by larger industry trends, including unfavorable pricing dynamics and ongoing industry convergence. […] The healthcare wholesector […] is grappling with significant cost pressures and intense consolidation activity. ” (p. 2)

Concerns regarding healthcare reforms, specifically changes to The Affordable Care Act, are voiced on p. 16 of the annual repot. Though clarity about these changes are sparse, McKesson notes that “such policies and reforms may have a material adverse impact on our results of operations.” McKesson’s worries are not unwarranted. The healthcare industry has changed significantly, especially cuts in the reimbursement levels of Medicare and Medicaid. And since “many of our products and services are intended to function within the structure of the healthcare financing and reimbursement system currently being used in the United States” (p. 12), the threat is not to be reckoned with.

In general, I believe that fear of political interferences have contributed to – and continue to have – a negative effect on McKesson’s stock price – especially due to the topic’s role during the US presidential election.

Alright, so McKesson competes in an industry marked by price war and the threat of political involvement. We need to keep those risks in mind when attempting to assess the business’ intrinsic value.

McKesson’s Intrinsic Value
The most widely used approach to assessing such a value goes under the banner discounted cash flow (DCF) analysis. The method is outlined in the post How much is LEGO worth?, but let me flesh it out quickly.

You may have heard Warren Buffet say: “Intrinsic value can be defined simply: It is the discounted value of the cash that can be taken out of a business during its remaining life.” A DCF analysis aims to determine just that. The model seeks to estimate a company’s present value based on the future free cash flows of the business (into perpetuity). In essence, free cash flow (FCF) is the amount that is left after spending the money needed to maintain the operational assets (e.g. property, plant and equipment). Hence, the free cash flow is simply operating cash flow – capital expenditures. FCF is significant, as it represents 1) the cash you could pocket if you owned the entire business, and/or 2) the cash the company can allocate as it sees fit, e.g. reinvest in the business’ growth, pay dividends or share buyback programs. Once we’ve made our projections as to the growth of these free cash flows, we need to settle on an appropriate discount rate based on the investment’s risks. Finally, we subtract the business’ debts ($6.359 billion in McKesson’s case) and add its cash position ($2.456 billion).

To get the discounted cash flow (DCF) model humming, let’s take a look at how McKesson has fared historically.

* In length of above calculations in regards to the adjusted EPS, we too need to account for the one-time gain of McKesson’s sale of its Technology Solutions business here. Rather than applying the net income figure of $5.153 billion, we use $2,135 billion, so the calculations go: Operating Cash Flows of $3.413 billion – Capital Expenditures of 562 = $2.851 billion in FCF (see cash flow statement here).

The pattern I alluded to earlier regarding decent revenues growth, but shrinking margins are evident from the above table as well. On a 9-year period, free cash flows compounded at an impressive rate of 21% annually. However, the 5-year history isn’t very remarkable with a measly 2.3% growth rate. Indeed, the price war has taken its toll.

Let’s speculate that the price war continues, and McKesson will only be able to grow its FCF at 3%. According to below scheme, we arrive at an intrinsic value of $202-229 when applying a 12.5% and 15% discount rate, respectively. Due to political risks, the threat of continuing price war and alarming macro factors (the markets are very shaky these days), I believe a discount rate in this range is warranted.

One might argue that a 3% growth rate is too optimistic given the downtrend in FCF from 2016 to 2017. It might be, but any price war has to end eventually (I suppose?) if the industry isn’t to be a blast from the past years forth.

As mentioned, McKesson acknowledges the challenges, but management says they “have put in place the assets and made the strategic adjustments we believe are needed to position our business for long-term double-digit annual EPS growth.” (p. 2) In my view, McKesson’s strong revenues growth indicate a thriving business despite profitability issues. These statements and McKesson’s sales momentum tempted me to run a bit more optimistic valuation.

If you’re an optimistic creature who dares believe in a “double digit” growth rate of 10%, the intrinsic value would come out at $295 to $334 depending on the discount rate (12.5% and 15%). If you’re not that optimistic, but feel more comfortable with a 5% growth rate, you would arrive at a per share intrinsic value of $225 and $256, cf. below scheme.

Note that a 3% perpetuity growth rate has been applied to all scenarios.

These numbers may seem a bit arbitrary, but let’s say the intrinsic value is somewhere between $200 and $250. It seems like a fairly decent investment given the 25-40% margin of safety and 35-70% upside potential.

Capital Allocation
Management seems to think it’s undervalued, too. In 2016 and 2017, McKesson has bought back $3.757 billion worth of its own stock at prices ranging from $141 and $173. Another sign that McKesson’s well-paid management team is shareholder friendly after all is evident in their dividend policy. It’s not much, but McKesson distributed $1.24 in dividends in 2017. “The Company anticipates that it will continue to pay quarterly cash dividends in the future.” (p. 31 ) While the interest on cash and cash equivalents pay next to zero, a 1.82% dividend yield isn’t too bad in my book.

Moats
I think it’s safe to say that the industry as a whole is well-protected by high barriers to entry. There’s virtually only three players in the healthcare supply chain management segment: McKesson, Cardinal Health Inc. (CAH) and AmerisourceBergen Corp. (ABC).

As these players have market caps of $30 billion, $21 billion and $19.5 billion, respectively, and assets totaling $61 billion, $40 billion and $35 billion, it would be a huge capital investment for a new entrant to compete – not to mention the energy one should put into building the capabilities and distribution networks as well as acquiring patents (of which McKesson has 48) and establishing much-needed political relationships. In short, it seems very unlikely that McKesson and its competitors will welcome other gladiators to the arena.

Alright, so it appears that the industry is well-protected. What about McKesson – is it armoured to guard against Cardinal Health and AmerisourceBergen’s attacks? Based on the table below, which is a 5-year snapshot, it appears McKesson is outperforming almost across the board. Hence, one could be tempted to conclude that McKesson enjoys a moat rooted in economies of scale, i.e. it possesses a cost advantage.

* Again, the one-time gain from de-consolidating Technology Solutions mentioned above skews this figure.

Conclusion
Well-protected industry. A three-player oligopoly, which McKesson dominates on both growth and profitability metrics. A recent slashing in stock price. A 25-40% margin of safety on a relatively conservative intrinsic value calculation. A shareholder friendly management team, which buys back shares and pay a decent dividend.

It sure sounds swell! Yet, one ought to remember the risks outlined above. In addition, on a macro level, the markets appear rather shaky. Though McKesson appears undervalued, the stock might get hammered if we indeed are standing face-to-face with a global selloff, which some seem to believe is upon us (and I’ve hoped for in quite some time).

Nevertheless, I’ll dip my toes into McKesson, and if it’s going to get crushed in the next few weeks, I’ll most likely increase my position. Like Preston says in this podcast episode: “This is a pick I don’t really mind buying at such a high market […] because if the market does crash I am holding something that I have no problem buying more equity of if the price would go lower. […] Typically at this point in the credit cycle, you’re not able to find companies of such quality that have such strong financials. […] This is one of the best picks I’ve seen in a long time.”