Book Summary of The Everything Store: Can Amazon’s sky-high fundamentals be justified?

I have been fascinated by the Amazon’s stock rally north. I have looked at it form the sidelines and wondered: “How can so many market participants consider a stock trading between 175-1,400 times earnings attractive?” I hoped that The Everything Store could help answer that question. Luckily, it could. I’ll try to combine this book summary with a miniature stock analysis so that the book’s insights are put in context.

The business
Amazon is the largest eCommerce retailer measured on both market value and sales. The company started out selling books, but is now offering essentially all that your heart desires, thus the nickname The Everything Store. Amazon has fulfillment centres that store all of Amazon’s “own” products, which they sell directly to consumers. In addition to Amazon’s “own” sales, its Amazon Marketplace platform is make-up 40% of the revenues. It’s a webservice that allows other businesses to sell products via Amazon’s website. Finally, Amazon’s other services such as Amazon Prime, Kindle and the appertaining subscriptions as well as its B2B Amazon Web Services are flourishing. Yes, Amazon is indeed everywhere.

The stock
Ultimo November 2017, the market cap is at an astounding $571 billion with the stock trading at $1,180. The fundamental landscape looks as follows:

Measured on P/E and P/BV we’re dealing with an absolute high jumper. These ratios are achieved by the stock price’s skyrocket of a rally in recent years, cf. the graph below. 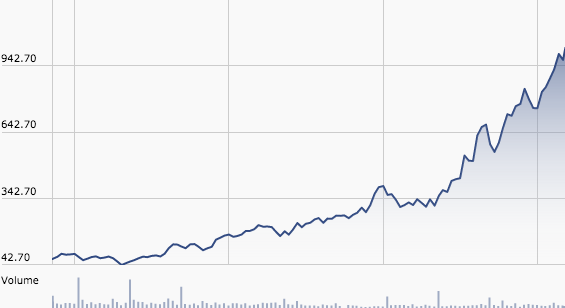 The stock price has known but one way: north! How is so much optimism injected into a stock with such a measly net margin and a mere average return on equity? Entering the book’s insights.

Long-term and customer-centric – always!
Founder, CEO and majority shareholder, Jeff Bezos, is known for his Jeffisms. These are small grains of gold that are repeated over and over again. One of these Jeffisms goes something along the lines of: “Amazon regards itself as a customer-centric business, not a competitor-focused business.” Obviously, Amazon keeps an eye on competitors’ actions, i.e. eBay, Wal-Mart and Alibaba. However, the focus is always on the customers’ needs. Jeff is practically obsessed with providing the best and cheapest shopping experience.

This focus is illustrated best by a story from the book. When Harry Potter and the Goblet of Fire’s release date came about, Amazon made sure its customers could pre-order the book with a 40% discount and a guarantee it would arrive in your mailbox on the release date. Due to the large discount Amazon lost money on each of the 255,000 orders that were made. Wall Street analysts were appalled by the lack of consideration for shareholders. Jeff’s answer was another Jeffism: “That either-or mentality, that if you are doing something good for customers it must be bad for shareholders, is very amateurish.”

Another way Jeff is extending his reach and ensuring his customers are well-catered for may be found in Amazon’s acquisitions. In the last chapters of the book, numerous examples of how Jeff went about getting competitors to hand over the keys to their businesses. For instance, it came to Jeff’s attention that Diapers.com was able to sell diapers and other baby-related goods to a happy and loyal customer base. Now, that was a business Jeff wanted to own. He bid, and they wouldn’t sell. What to do? Well, Jeff bought a ton of diapers, and undercut Diapers.com’s prices, thus forcing them to lower prices too. Naturally, Jeff undercut their prices once more, and so it continued until the profit margins were destroyed. To Amazon, the diaper product category constituted a practically non-existing part of the business, so it wasn’t a problem to operate with a loss. But to Diapers.com it was the fatal blow. Sure enough, some time passed and eventually Diapers.com had to agree to sell, and thus hand-over the reins to Jeff.

As implied, this mentality and approach to acquisitions is not a one-off occurrence. Jeff puts it well when he states: “We will continue to make investment decisions in light of long-term market leadership considerations rather than short-term profitability considerations or short-term Wall Street reactions.”

Amazon’s self-reinforcing loop
The aforementioned long-term and customer-centric philosophy is expressed in what is the heart of Amazon’s business model, the self-reinforcing loop. It’s described along the lines of: Lower prices lead to more customer visits. More customers increase sales volume, and attract more commision-paying third-party sellers. This enables Amazon to utilize their cost-base more efficiently, i.e. their fulfillment centers and the servers that run the website. This increased efficiency allows Amazon to lower prices further.

This loop enables Amazon to expand its moats. In my view, Amazon possesses two easily-identifiable and strong moats: network-effect and cost-advantage. Amazon has been able to constantly increase the number of sellers on its Marketplace platform, hence ensuring Amazon has the largest assortment. These third-party sellers are engaging in cut-throat price-competition to be the cheapest and thus winning the customer’s order. This leads to a cost-advantage that make customers come back. It’s beautifully engineered by Jeff & Co.

To be, or not to be Amazoned
The main reason many retail stocks have plummeted to depressed levels during the last few years can be traced back to the Amazon effect. The most feared scenario within the retail industry is to be Amazoned: “To be Amazoned means to watch helplessly as the online upstart from Seattle vacuums up the customers and profits from your traditional brick-and-mortar business.”

Jeff is indeed an unstoppable force who doesn’t rest until Amazon offers everything, everywhere.

Will Jeff & Co. conquer the world? Will Amazon become the one-stop-shop from which everyone buys everything? This appears to be the line of reasoning that has pumped its stock price to our Lord and Savior. If one is convinced this will be  the case, perhaps Amazon is a buy despite its skyhigh fundamental ratios. I have nothing but respect towards Jeff Bezos and Amazon, but it goes against every fiber in my value investing DNA to pay that much for hope, dreams and expectations. But if Amazon is one day able to materialize the revenues growth on the bottom line, it surely will become every investor’s juicy dream.

Book Summary of Where the Money Is: Value Investing in the Digital Age