Today, I’ll take a closer look at a company, which has been on my watchlist for quite som time, namely Halfords Group PLC.

The company
Halfords Group consists of two divisions. The biggest leg is its retail division where the company enjoys a market leading position for sales of motor and bike parts with 504 shops and growing eCommerce revenue (30.5% increase from 2016 to 2017). The company has since 2010 moved into the workshop market. Today, Halfords services Great Britain’s drivers through 313 autocenters. The former accounts for 86% of the sales, and the remaining 14% revenue comes from the service and repair business.

The stock
At the time of writing, Halfords’ market cap is £653 mio. with a stock price around £3.28. Primo august 2017, the fundamental landscape looks as follows:

These ratios don’t scream bargain the same way that e.g. Sports Direct (SPD) did. In my view, however, it’s respectable. We’re dealing with a reasonable ROE and ROIC at an attractive P/E. The P/BV of 1.6 is a tad higher than I would prefer, but the low D/E attenuate my worries in this regard. Indeed, there are both positive and negative elements in the above snapsnot. Yet, the captivating aspect of Halfords isn’t found in the here-and-now picture, but in its historic performance. It was the company’s stability that really caught my eye when I glanced over the last 10 years’ reports. Evidence? Take a look at the table below (earnings (EPS), dividend and book value is listed on a per share basis).

Offhand, we have a company on our hands that is steadily increasing its revenues, maintains stable earnings and pays out dividends consistently. In addition, the book value increases nicely year after year (note, however, that a great sum is listed as goodwill; namely, £365 mio. of the £776 mio. in the assets column is goodwill). There is hence not a particularly satisfying safety in the balance sheet in terms of tangible assets. However, goodwill is not ‘value-less’; it stems from acquisitions that might turn out to be wise capital allocation decisions. 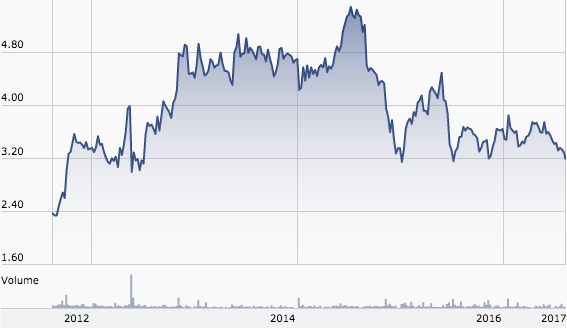 What happened? First, as I highlighted in my analysis of both Sports Direct (SPD) and Domino’s Pizza (DOM), Brexit continues to be a dark cloud over Britain’s retail industry and overall economy.

Second, If you take a look at the above table, you’ll notice that the EPS has been fallen since its peak in 2015. The drop in EPS is relatively modest, but the stock price’s downturn is everything but. The price’s trip south from £5.50 to £2.80 due to a one pence decrease in EPS seems a bit extreme, and might be the buying invitation that value investors have been waiting for. Indeed, the earnings fell from 2016 to 2017; 11.7% to be exact. The chairman points to the pound sterling’s weakening relative to the dollar as well as the National Living Wage program, which ‘forced’ Halfords to increase wages for its employees, as reasons for the drop in EPS.

We’ve now determined that there are challenges. Challenges, which do worry the chairman (cf. the section Chairman’s Statement on p. 3 of the 2017 annual report), but let’s try to look ahead.

Moving Up A Gear
Halfords is now 2 years into its Moving Up A Gear strategy that aims “at modernising the business and consolidating our position as a specialist, service-led retailer in order to drive sustainable long-term growth.” (read the Chief Executive’s Statement at p. 4 of the 2017 annual report). To achieve this, Halfords has formulated five pillars that act as the driving force behind the strategy: 1) investing in customer data and insight capabilities to maximise the lifetime customer value; 2) focus on customer service in all parts of the value chain; 3) cement its uniqueness via exclusive products, relevant innovation and unique partnerships; 4) create a better shopping experience both on and offline; 5) build-up an infrastructure that allows for effective expansion. According to the CEO, Jill McDonald, the strategy has already come to fruition by creating a strong, fundamental business performance. She believes that the drop in EPS is caused by external factors, especially the weakening of the pound sterling.

Offhand, it seems like she’s right. Halfords continues to gain market share. The company sits on 15% of the market for car accessories and motor parts. It accounts for about 1.5% of the repair and service market, which is characterised by fragmentation with more than 30,000 shops whereas 2/3 are independent shops (in contrast to franchises).

The markets for bicycles and equipment as well as service/repair are fragmented as well, since the majority of Britain’s 2,500 shops are independent. Halfords sits on 10% of the bike repair and service market, and 26% of the retailing market for bicycles and accessories.

There are usually economies of scale benefits of being a market leader on a fragmented market where the independent competitors can’t match neither prices nor availability. Halfords seems to be reaping such benefits as well, since the company is expanding organically by opening new locations while e.g. 10% of the independent bikeshops had to close down in 2016. In addition, Halfords has expanded via acquisitions by buying stakes in Tredz and Wheelies as well as TyresOnTheDrive.com. These acquisitions mixed with Halfords’ strategy enables it to offer a 4-legged customer value set according to the annual report: 1) prices you can trust; 2) quality you can trust; 3) range you can rely on; 4) service that wows.

Risks
These ‘excuses’ in terms of the decrease in EPS, polished value sets and statements regarding positive market trends must be perceived with a grain of salt, as the information is found in Halfords’ annual report. The uncertainty of Brexit’s influence on Britain’s economy and the pound sterling is still looming. The markets for bicycle equipment and car accessories are an easy victim for the ferocious beast we know as Amazon. Furthermore, we’re at what seems to be a peak on the credit cycle (at least evaluated based on historical standards). Halfords’ repair and service division should be fairly resistant for such an event whereas the sales of equipment and accessories is probably in the line of fire.

Valuation
Doing a DCF-analysis is, as always, an ungrateful task, since it involves an array of assumptions (or guesses, if you will). It is, however, a decent starting point to evaluate a buying decision. According to the annual report, Halfords expects a growth rate between 2-5% for each division. I’ll err on the side of caution, which is why I assume that EPS will grow with 2% for the first 5 years, and 3% for 2022-2027. I further assume that the past’s 10-year average in terms of dividend payout rate (57%) will be maintained going forward. Finally, I assume that the stock will be traded at a P/E of 15, evaluated based on moderate growth outlooks and a premium for its market leader position. For an investment as this one, which has displayed quite satisfying stability, I would require a 5-7.5% return (discount rate). The value thus ranges between £4.11-£5.02. Again, to err on the side of caution, let’s assume the intrinsic value is closer to £4 than £5. In this case, I don’t reach my required 30% margin of safety. 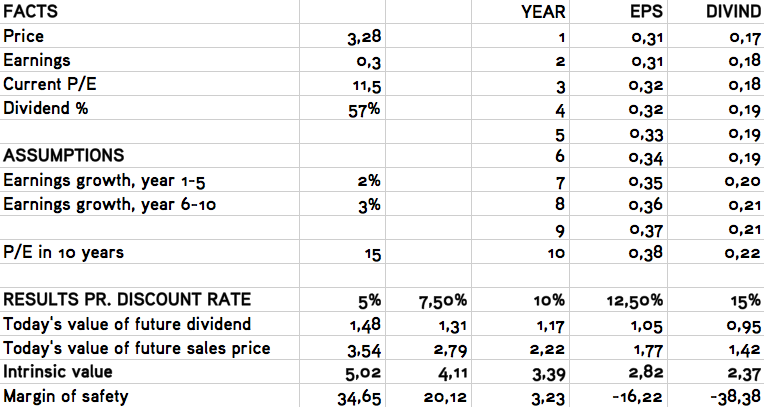 Conclusion
In length of the previous section, Halfords is still on my watchlist – not in my portfolio. If the stock drops below £3, I’ll strike (given, of course, that any information, which may alter my predictions about the future, doesn’t surfaces). Until that happens (if it happens), I do what is most difficult when you spot an interesting business you wish to own: I’ll sit on my hands. I would love to get my hands on such a stable stock with a 5-7% dividend rate and cemented market positions. I believe the value is there, but it must be acquired at the right price.