Today, I made a trade that may seem absurd from a value investor’s perspective. I’ve bought myself a slice of the London-based Domino’s Pizza Group PLC (DOM).

The company
The London-listed Domino’s Pizza Group owns the rights to run Domino’s Pizza restaurants as well as ‘sell’ franchise rights in Great Britain, Ireland, Switzerland, Luxemborg and Lichtenstein. In addition, Domino’s has associated investments in Germany, Iceland, Sweden and most recently Norway with the acquisition of Dolly Dimples. The company has just over 1,000 restaurants whereas 82 of them opened their doors in 2016. One part of the company’s revenues stem from its own ‘corporate restaurants’: the locations that Domino’s own themselves. The other revenue stream comes from franchisees’ purchase of food and royalties, which the restaurant owners pay Domino’s for the rights to use the brand, marketing efforts and its eCommerce platform etc.

The stock
At the time of writing, the company has a market cap of £1.4 billion. By the beginning of July 2017, the fundamental landscape looks as follows:

I know what you’re thinking: “What on earth is the imbecile thinking? It’s insanely expensive. He calls himself a value investor? Jeez..” But allow me to present what I pay up for. Over the last decade, Domino’s has been able to..

It seems like we have a true cash-cow on our hands. It’s a business with an incredibly low need for capital, and it produces sky-high returns on the little capital that is tied into the business. For these reasons, Domino’s has been able to payout 59% of it earnings in dividend on average over the last 10 years (53.7% in 2016).

Why now?
We have now arrived to the point where I can hopefully convince you that I have not lost my value investing mindset. “Why now?”, you may ask. I hope the below graph is illustrative in this regard. 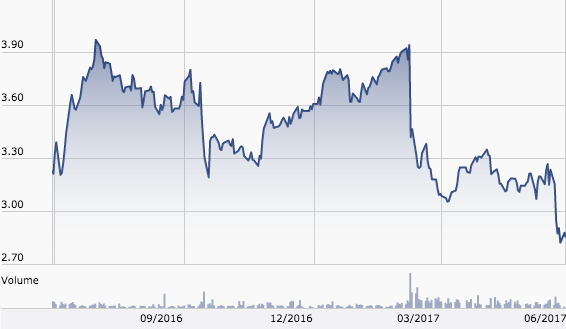 For quite a while, I have been waiting for a chance to get my hands on a capital light business, which reliably achieves extraordinary returns on invested capital, at an attractive price. When Domino’s dropped 30% from its 52-week high (from £4 to £2.85, which was my purchase price) in just 3 months, I didn’t let the opportunity pass.

What’s the reason behind this sudden trip south? Brexit, of course, shocked the British stock market. In addition, some analysts report that Domino’s has difficulties keeping the historic growth momentum in Great Britain for the first half year of 2017. Others believe that the competitors’ initiatives to build similar, strong eCommerce platforms as Domino’s is a risk as well as increasing food prices’ influence on the bottom line.

Valid concerns, but..
These concerns are scary. One of Domino’s competitive advantages is its eCommerce platform. According to the annual report, 72% of all its revenues in the main market, Great Britain, stems from digital orders, either via the website or the Domino’s app. From 2015 to 2016, online sales rose with 21% (revenues from mobiles alone rose 31%). Customers purchase more via the website, as they are tempted by the appetizing images that Domino’s use for their menu. I mean, who doesn’t add bread sticks to the cart when ordering a family pizza online while plagued by hunger? Furthermore, the profit margin is higher for online sales relative to telephone orders or ‘drop-ins’ from the street. This trend is thus very lucrative for Domino’s, but of course something that would eventually attract attention from competitors. How big of a threat is the competitors’ move into the digital sphere?

Obviously, such a profitable market space attracts competitors. I am – though maybe cocky and naïve – not too worried due to 2 reasons: 1) According to the annual report, Domino’s continues to invest in its digital leadership position; and 2) Domino’s position as a market leader (the market follower seems to be Greggs PLC, though it doesn’t have the same momentum as Domino’s) in conjunction with its strong brand ensure a ‘top of mind’-position in the consumers’ minds (I suppose!)

This is obviously a subjective assessment, but I regard Domino’s brand value and digital superiority as the company’s moat, which allows it to sustain its top-class profitability and high returns on capital.

An exaggerated valuation enhances understanding
Let me start off by mentioning that this valuation doesn’t sit well with my conservative mindset. In the name of illustration, I would merely like to draw a picture of what Domino’s value would be in 10 years as so forth its historic performance could be extrapolated into the future. In other words: This is not a Discounted Earnings Flow valuation I regard as accurate. If I assume that Domino’s will continue to payout 59% of its earnings in dividends while being able to sustain its 21% growth in EPS, and trades at a P/E multiple of 20 in 2027, you would get a 50% margin of safety even when you apply a discount rate of 15%, cf. below. 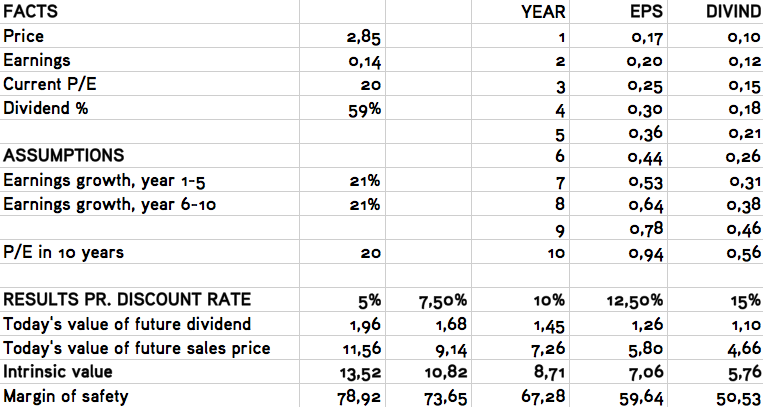 “Frivolous!” Indeed, it is very less conservative to believe that Domino’s can continue its growth adventure to the same extent. I do believe, however, that Domino’s ambitious growth targets, ventures into new markets, acquisitions of other pizza franchises (e.g. Dolly Dimples) and digitalization efforts seem promising.

Due to the exceptional past performance, I find it difficult to make qualified guesses about growth rates, dividend payouts and appropriate discount rates. I can only conclude that Domino’s seems attractively priced even with far more subdued expectations than what is portrayed in above analysis. On this ground, I have joined the ownership circle of this delicate pizza paradise – despite the high fundamental metrics.

Conclusion
This is a very atypical purchase for me. I’m usually quite hesitant when it comes to ‘paying up’ for stocks that seem expensive measured on fundamental metrics. Yet, I believe there’s more powder in this growth rocket, which is why I have a very long time horizon. The short-term challenges outlined above – as well as the threat of the next downward swing in the credit cycle – do thus not concern me particularly much. Domino’s blasted right through 2007/2008 with increasing revenues and earnings (though the stock took a beating, but hey, that’s a buying opportunity, right?), so the business doesn’t seem particularly threatened by cyclical swings. A concern I do have, however, is whether I’ve caught a ‘falling knife’. Time will tell whether I’m a naïve fool or a healthy opportunist.