A term I have yet to introduce here on the blog is value trap. In short, value traps are stocks that seem cheap measured on various fundamental metrics (e.g. P/E, P/S and P/BV), but due to unsolvable difficulties, the stock never travels north again. The stock may thus smell of value, but prove to be a trap. My task in the story of Buckle is to determine whether I’ve fallen into a trap or if I should increase my position.

The company
Buckle is an American retailer that sells clothes, footwear and accessories through its 467 shops in 44 states. The company’s primary target group is teenagers (12-20 year-olds). Buckle is particularly well-known for its BKE denims, which have accounted for more than 40% of the revenues for an extended period of time (42.2% in 2016 according to the annual report).

The stock
Medio august 2017, Buckle has a market value of $762 mio. at the current price tag of $15.60. Let’s take a look at the fundamental metrics that (possibly?) led me into a value trap:

What really caught my attention was its high returns on capital (ROE/ROIC), high dividend yield and the fact that the company is free of any long-term debt obligations – all at a low P/E and P/S. When I acquired the stock back in January, I though it was close to the infamous ‘bottom’, especially because of the aggressive downturn Buckle has been experiencing since Q1 2015, cf. below graph: 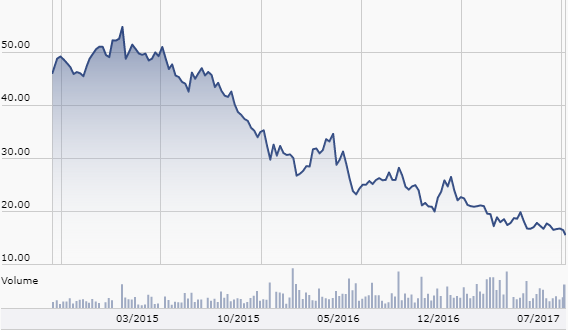 The reasoning behind the buy decision
Until now, I’ve had to accept that there’s some truth to the saying Meb Faber often proclaims in his podcast: “A stock that has fallen 90% is a stock that has fallen 80%, and then fell another 50%.” The ‘saying’ seeks to indicate that even though a stock has taken a beating, it can easily receive a few more slaps.

What is it, then, that has placed Buckle’s cheeks in the smack zone? From 2015 to 2016, EPS fell from $3.38 to $3.06, which put an end to a nearly decade long growth adventure. This fact bisected the stock’s price, from $55 to $26. From 2016 to 2017, EPS fell another 33% from $3.06 to $2.03, which drove the stock price down to $20. This was the time I decided to hit at the pitch. I considered Buckle another retailer that suffers under current tough conditions. Buckle, I thought, would regain its historical performance and status as a so-called growth stock as soon as the sector gets a bit of tailwind again. In addition, I thought that since Buckle announced that it’ll continue to payout its historical dividend of $1 a year, management too considered the stock’s decline a overreaction (since it didn’t intend to build up a cash-reserve to overcome obstacles). This was supported by the fact that Buckle indicated it would continue buying back shares (which an intelligent management team only does when said team regards the stock as cheap). Furthermore, in addition to to the regular yearly dividend of $1, Buckle has on average paid out $2.04 in special dividends each year since 2012. Extrapolating this trend into the future would mean that I would get my principal back in just 6-7 years ($20$/3 = 6,6 years).

In short, I convinced myself that I had seen something that the ‘panic sellers’ didn’t. Didn’t these sellers realize that the business increased its free cash-flow from $2.44 to $2.89 from 2016 to 2016 despite the challenging environment? And didn’t they see the book value increased either (from $8.64 to $9.11)? In terms of downside risk, I was quite captivated by Peter Lynch’s statement: “It’s difficult to go bankrupt when you don’t have any debt.” Buckle doesn’t need to raise capital to fuel expansion, since the company can open a new store for just $1 mio. according to the annual report. Mix this with Buckle’s strong balance sheet, and I saw plenty of expansion muscles that the company could put to use. As Buckle achieved a ROE/ROIC of +20% (the ROE average for the past 10 years is 38.02%), I thought that each dollar that was allocated to an expansion strategy would create longterm shareholder value.

Doesn’t it all sound flippin’ awesome? I thought so, and that’s why I decided to join all the other Buckle owners back in January.

Reflections and re-evaluating the buying decision
It might very well be that I underestimated Buckle’s challenges. I have since January listened to quite a lot of episodes of The Investor’s Podcast, where one of the hosts, Preston, often underscore the importance of revenue growth. He argues that the earnings can swing up and down, but as long as there’s a demand for your products (which is evident from the revenue), earnings difficulties can be overcome. You’re really in trouble, however, when the consumers leave you behind. Buckle’s revenues peaked in 2015 with $1.153 mio. It went downhill from there, first by hitting $1.120 mio. in 2016 and $975 mio. in 2017. It doesn’t get prettier when we take a look at the previous 12 months, since TTM revenue amounts to $944 mio. Buckle may be cost-effective when it comes to opening new stores, but if the consumers’ interest in you is receding, said stores won’t be nothing but holes for the business’ capital.

Next, I’ve read quite a lot about competitive advantages, or moats, during the past 8 months. In January, I was quite convinced that Buckle’s popular denims constituted the business’ moat. Today, however, I realize that my conviction is probably a bit weak. It may very well be nothing more than a popular product series rather than a glorified status symbol, which would have been a moat due to strong brand value.

Finally, in January I regarded the “Amazon is going to kill the brick-and-mortar shops”-narrative as a rather excessive assumption. I still have my reservations, but I now have a lot more respect for and understanding of this giant’s mighty power after having read The Everything Store.

A quick valuation is outlined below in order to round-up this depressing post about self-awareness. I can reveal that the variables in below DCF analysis is quite different from the ones I applied back in January. The primary reason for this downgrading of expectations is the decline in Buckle’s revenue. I take a point of departure in an EPS number of $1.90, which is the reported TTM number. I assume that Buckle will continue getting beaten up for the next 5 years, which is why I apply a -3% growth rate until 2022 (which might be too optimistic, but I ‘assume’ (hope, really) that the biggest slaps have been received). I guess that Buckle will gain a bit of momentum again from 2022-2027, which is why I expect a 3% EPS growth. I assume Buckle continues to pay out 40% of its earnings in dividends, as the other capital allocation options seem exhausted; for instance, the company’s ambition in terms of new store openings are nothing more than two in 2017. I do not assume any special dividends will be paid out, just to err on the side of conservatism. It is clear from below DCF analysis that with a discount rate of 7.5%, the price is essentially ‘correct’ in the current price range ($15.60 vs. $15.84) 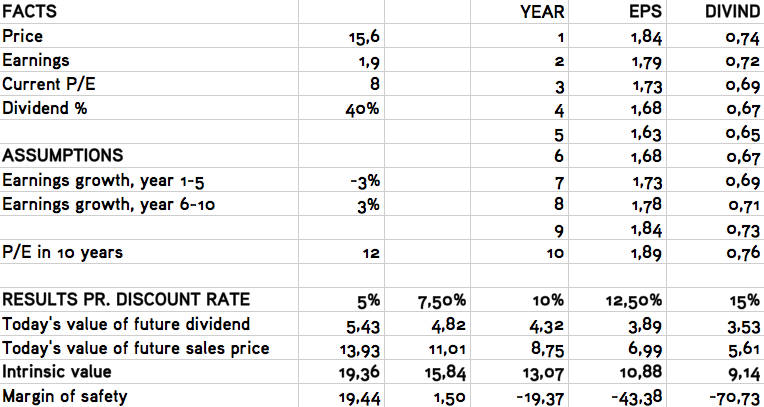 Conclusion
In poker, you got an expression: pot committed. If I for instance place a big bet relative to my stake of chips, which another player calls, I’m pot committed to continue playing the round, either by bluffing or letting the game take its course and hope that the 5 cards on the table will favor me. This is the dilemma I’m facing with Buckle. I’ve ‘lost’ 35% so far, and I have to admit that the adjusted outlooks aren’t glorious. Should I ‘bluff’ by increasing my bet now that the stock is cheaper, knowing that the odds aren’t terrific? Should I ‘fold’ and sell my portion back to Mr. Market? Or should I realize that I’m pot committed, but rather than increasing my position, just let the game run its course?

Maybe I’m stubborn and naïve, but I choose to go with the latter strategy. I hope that the variables not included in the DCF analysis, namely a good ol’ fashion turn-around or the continuation of the special dividend payouts, could save a seemingly loosing hand. The former will require the creation of a popular trend that can be capitalized on, an increase in brand value, or a succesful marketing programme that can bring back the business’ revenues to its former glory.

Personally, I’ve learned two lessons from this investment: 1) be convinced about a business’ moat; 2) act cautiously about companies with stagnating revenues. I blamed temporary, tough conditions in the sector for Buckle’s decline (look at the competitors; they’re all facing headwins). I obviously hope Buckle will pull-off a turn-around; maybe it’s in the offing and I’ve just bought-in too early? Time will show. Nevertheless, there might be some truth to Warren Buffett’s wise words: “I would rather be certain of a good result than hopeful of a great one.”