When I stumbled upon this profitable $15 million nano-cap stock with $12.9 million in cash trading around net current asset value, I was immediately intrigued. Hence, I quickly decided to dig deeper to figure out if some unlocked value should reside in Advent AWI Holdings’ balance sheet. I was pleased to find that the balance sheet wasn’t the only hidden treasure.

The business
AWI is a holding company with just two business segments. The largest of the two business legs is the 100% owned Am-Call Wireless. Via 15 stores in Ontario, Canada, Am-Call offers wireless products and services such as internet, cable television and cellular data. The products and services are provided by the Canadian market leader, Rogers Communications, and thus sold via a partnership agreement. Am-Call brings in $16 million in revenues whereas the other leg of AWI, Adwell Financial Services, ‘merely’ accounts for $204,634 according to the latest quarterly report. However, this business is established in 2016 and may perhaps gain momentum going forward. AWI owns 70% of Adwell whereas two other partners, each of which are familiar with the micro-financing industry, own the remaining 30%.

The stock
Primo november, AWI is trading at $1.28, which translates into a market cap of 15.3 million with 11.94 million shares outstanding. The fundamental landscape looks as follows:

Taken at face value, I agree, it doesn’t look stunning, but decent. A no-debt company that earns a somewhat respectable return on capital and achieves a comfortable net margin of about 9%. But wait till you gaze upon the balance sheet.

Valuation
AWI’s current assets total $15.6 million according to the latest quarterly report. By double clicking on the current assets, you’ll find that $12.9 million is made up of cash (yes, cool cash!). Add hereto $3.6 million in non-current assets such as marketable securities, operational properties as well as investment properties, and you arrive at an asset sum of $19.2 million. From that figure, we can subtract the ‘measly’ total liabilities of $1.8 million, hence arriving at a shareholders’ equity of $17.4 million. The stock is thus trading below book of a very liquid and solid balance sheet.

It thus appears that the potential downside is quite modest, since the book value of $1.46 per share is 12% above the current stock price of $1.28. Now, I have convinced myself that there is a neat cushion, but what about the upside?

I found it quite difficult to perform a valuation of AWI due to 1) very limited media coverage, 2) ‘scraped’ annual reports that i.e. don’t present any forward-looking statements, 3) and wild swings in cash flow activities. However, the net income/EPS has proven quite stable, ranging between $1.2-1.4 million and $0.10-0.13 in the past five years. I will thus use said figures to value the business (though it might seem vulgarized). The 2016 EPS of $0.106 is very close to the normalized (10-year average) of ~$0.11. Hence, the current earnings level appears to be an accurate reflection of the business’ true earnings power. I believe a stable business such as AWI should trade at a P/E multiple of at least 10. To err on the side of conservatism and ‘past facts’, let’s use the 10-year average P/E multiple of 9.7: $0.106 x 9,7 = $1.028. Add hereto the $1.080 cash per share, and we arrive at (I believe) a conservative intrinsic value of $2.10. To be even more conservative, one could subtract all liabilities from the cash position, and ‘only’ add $0.929 to $1.028, which translates into an intrinsic value of $1.94. In the opposite end of the conservative-o-meter, we could add the book value of $1.46 at face value to $1.028, and thus come up with an intrinsic value of $2.49.

Regardless of the multiple and ‘add-ons’ one employ, AWI appears undervalued in my humble opinion, offering a 35-49% margin of safety from current levels.

Catalysts
Some famous investor once said something along the lines of: “Acquiring the undervalued asset is primary. Unlocking said value potential is secondary.” Now, as I have just admitted, I seem to believe AWI is undervalued. But how can I be sure that this ‘measly’ $15 million nano-cap company will ever be recognized by Mr. Market? I can’t. Yet, I spot several catalysts that might ensure the gap between price and (my assessment!) of underlying business value is narrowed, including..

Are these scenarios likely? Heck, I can but pray that value is unlocked in some fashion. But, if it comforts some among us, the stock has flirted with a stock price of $2 in the past. 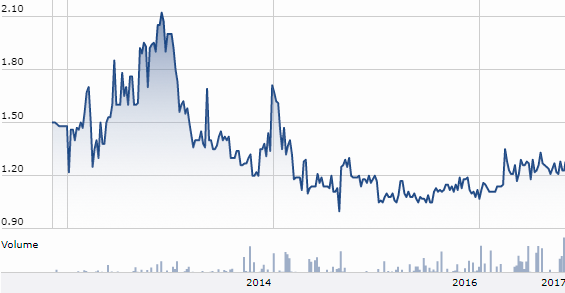 While we wait..
Us mortals can’t know when, or even if, AWI’s value will be unlocked. But while we wait, let’s seek comfort in a few facts. Though management hasn’t bought back shares or paid dividends (until recently), they haven’t wasted it either. On the contrary, AWI has increased its book value with 11% annually (on average) over the past 10 years. Let’s also ease ourselves by acknowledging that management owns +30% of the shares outstanding, thus ensuring an alignment of interests with investors.

Briefly on risks
Yes, obviously there are risks involved as is always the case. One such risk is time; an ‘under the radar’ stock such as AWI might not reach its fair value even though business is booming. Another is the revenues’ deterioration since 2015 (from $17 million to current levels of $15 million), which isn’t covered by any outlets I could find. However, the net income increases year-over-year despite this trend, so my mind is somewhat at ease.

Putting these and other risks aside, I believe the cushion provided by the balance sheet along with the array of catalysts constitute an attractive risk-reward asymmetry at current levels. As long as management doesn’t allocate capital foolishly and thus destroy shareholder value, I believe AWI is a Dhandho investing opportunity, namely one that offers a substantial upside while minimizing the downside. “Heads, I win; tails, I don’t lose much.”