Numerous books claim that one should never trust the so-called ‘experts’ when it comes to stock recommendations. “They don’t know jack more than us mere mortals”, goes the criticism. Can this be true? Shouldn’t the person whose job it is to analyze stocks 40 hours a week not know more than the common man? And if they do know more, shouldn’t they have an edge and thus be able to beat the market? This post dives into the criticism, and your’s truly analyses a handful of years’ results by taking a point of departure in Sydbank’s buy, hold and sell recommendations.

The chimpanzee and the stock list
In Contrarian Investment Strategies, David Dreman claims that a blindfolded, margarita drinking chimpanzee can out-compete your portfolio manager by simply throwing darts at a stock list. He proves that these ‘experts’ always buy at market peaks, and sell at market bottoms; the exact opposite of the good ol’ dogma “buy low, sell high.” In fact, according to David these analysts are often perfectly wrong. Namely, the exact opposite of their prophecies are often what occurs.

Nassim Taleb is another critic of Wall Street who labels these analysts and experts “empty suits” in his book The Black Swan. Nassim argues that their job is to create recommendations, make predictions and project trends. That’s what they’re paid to do, all in an effort to generate buy and sell orders so that their employers pocket a commission.

Finally, it’s worth mentioning that analysts are often called sizzies. They usually don’t dare to expound an opinion that goes against the consensus due to the career risk it poses. If they merely swim with the current and make a lousy prediction, his or her colleagues did so too. Hence, his or her behind is not placed extraordinarily in the smack-zone – everybody was wrong, everybody wins (except the ones who took their advice)!

A home-grown empirical study
Aforementioned books are written by Americans. I am pretty confident that Denmark’s financial institutions are poles apart from Wall Street’s unscrupulous and morally questionable behavior. But are my fellow country men any better at predicting the future? Should we follow their recommendations?

To answer those questions, I have dived into a handful of publications of Sydbank’s monthly magazine. I listed all the stocks Sydbank recommended each December between 2012-2015, and then tracked their performance the subsequent 12 months. As all stocks are listed in Denmark despite Hennes & Mauritz (H&M), I used the Danish OMXC20 index as a benchmark to track performance.

Imagine four investors: one index investor in OMXC20, and three other gents who followed a given strategy where one blindly acquired Sydbank’s recommendations within a given category (either buy, hold or sell). They are all handed 100,000 kr. on January 1st, 2013. Our four investors re-balance their portfolios ‘mechanically’ each year based on the latest December-recommendations. They place an equal amount of coins in each security, hence allowing us to use the average increase/decrease to compound our initial 100,000 kr. capital with. Think, who do you think will stand victorious on January 1st, 2017? 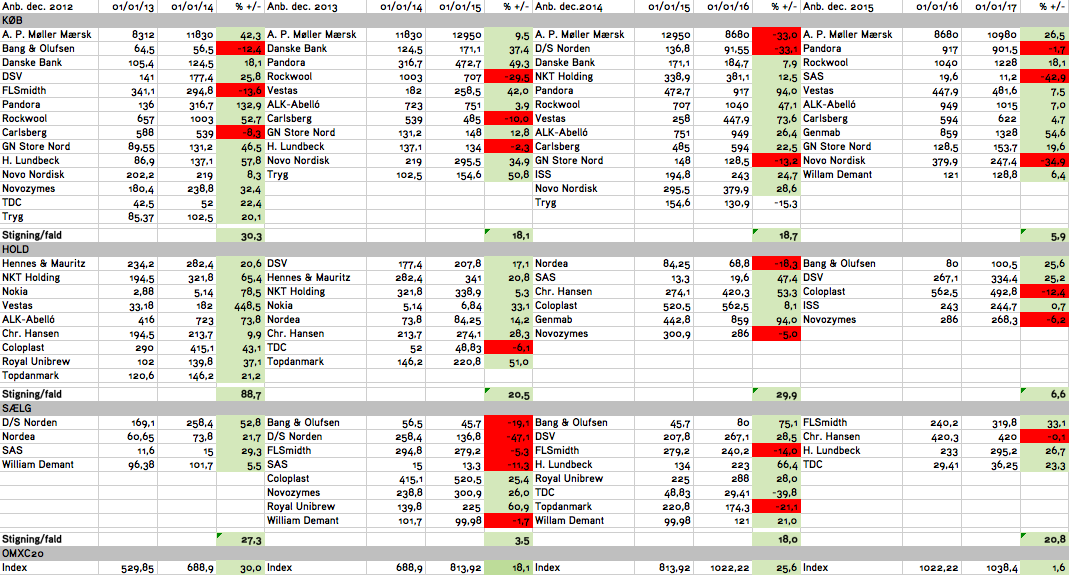 Applying the above table’s returns per category per year, and start compounding our initial capital, this is how our four investors would have fared:

Had you invested 100,000 kr. in the market on January 1st, 2013, your net worth would be 195,191 kr. That’s nearly twice as much – not too shabby (especially since this strategy demanded one trade, hence one commission). If we, however, disregard the banks and Uncle Sam’s piece of the pie, the buy recommendation investor would follow suit with 193,438 kr. Interestingly enough, our sell-guy wouldn’t be all that jealous, as he pocketed a measly 5,628 kr. less. Both of them would be envious to learn that our hold investor stand triumphant with a royal sum of 314,886 kr.

“I’ll just follow the hold recommendations going forward!”
Is that the conclusion? Should we just invest in Sydbank’s hold pool of stocks going forward, and bank big bucks for ourselves? Perhaps. It’s not the lesson I stuff down my knowledge backpack, however. I believe these learnings are more profound:

If one were to boil down these lessons to one key take-away? I’d say that beating the market is difficult; doing so by following others’ recommendations is virtually impossible.

How much is LEGO worth? A discounted cash flow experiment